So far in this series about building a solid trading strategy we’ve gone over picking a time frame, determining trend direction and deciding on trade entry criteria and initial stop loss level and take profit level placement. We even talked about using higher time frame trend direction to filter trades. I now want to go over trade management.

Just so you know, I’ll be going over money management in the next installment. When you place your trade, you need to decide on the proper lot size according to your money management strategy. This is one of the most important parts of your trading strategy, so I want to go over it separately.

What do you do after the trade is placed?

Let’s assume you’ve figured out when to get into the market and where to place your INITIAL stop loss and take profit levels. Now what? Well, now you need to “manage” the trade. I want to give you some ideas to think about.

You could simply set up the trade with the initial stop and take profit and forget about it. This is common with fixed time trading or end of day trading where you set up your trades once, at the same time every day. When the trade is placed there are 5 things that can happen…

Let’s say you are trading the New York session and place a trade. You set your initial stop loss and take profit, but don’t want the trade to keep trading past 3 or 4 o’clock when the trading volume is less. You could have a rule where you close trades at a certain time if it is still running and hasn’t hit stop or target levels yet. 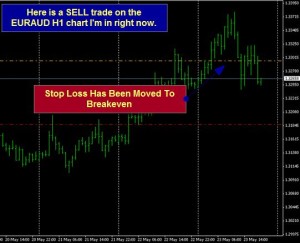 Moving the stop loss to breakeven can help lock in unrealized profits.

At some point in the trade, you might want to have your stop moved to breakeven or a little better.

Nobody likes to see a trade that goes into profit turn around and end up in a loss. By moving your stop to breakeven at some point, you take the risk from the trade. Once you are in a no risk trade it is much easier to handle psychologically. (You must also be prepared to be stopped out with no gain or a very small gain).

Similar to moving your stop loss to breakeven, you could trail your stop at certain points to lock in profits. Here are 4 typical ways of doing this…

There are many other ways of trailing stops, but you get the idea. (Maybe I’ll do a post just about trailing stops in the future).

Partial profits are when you take a portion of your position out of the market at a specified time, and let the remaining portion run. For example, you place a trade with 1 lot. Your final take profit is 100 pips, but you take half the position (0.5 lots), off at 50 pips. You let the remaining 0.5 lots run.

At some point you might decide it is just time to close the trade. The most common occurrence of this is when you get a trade signal in the opposite direction. Or, you might be trading multiple pairs and want to close all pairs when your profits reach a certain dollar amount over all.

The Importance Of Automating Your Exit Strategy

OK. I think you can see there is a lot to think about AFTER the trade is placed. It is important to have a plan BEFORE you get into the market to keep yourself from making decisions based on emotions. In a lot of ways, managing the trade is the hardest part of trading.

Don’t forget, your trade management strategy can be a combination of many of the strategies I’ve mentioned.

Many people are very rational BEFORE the trade is placed. But once in the market, where real money is at stake, they become irrational and emotional. Here is a common scenario…

Basically, you just blew up your trade plan. And since your trade plan should give you an edge and put the odds slightly in your favor… you are now just gambling.

What techniques do you use to protect profits in your account? Share your ideas in the comments section below.

Read the article in the series: How to pick your money management rules