One of the questions most often asked of me is how, as a trader, do you know the trend has changed.  While it is definitely an important question, the answer is also one of the most elusive – and the answer is by no means clear cut. 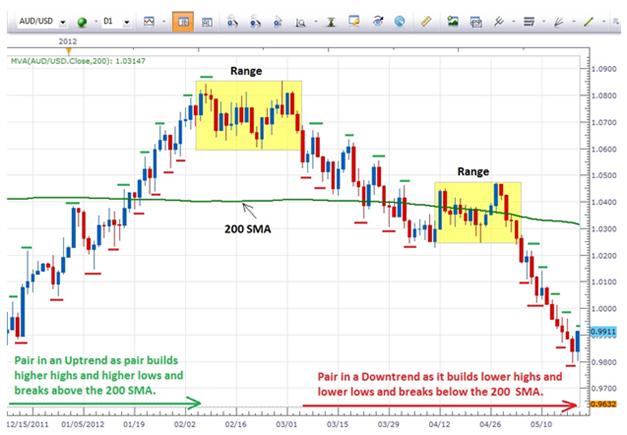 The last candle on the left of this chart is dated December 15, 2011.  This is when the uptrend depicted on the chart began.  We can see that the uptrend consisted of price making higher highs and higher lows and breaking through the significant resistance level presented by the 200 SMA.  Also, during the uptrend the AUD was one of the strongest currencies and the USD was one of the weakest.

When all is said and done regarding the uptrend, price reached its highest point on February 29, 2012.  This bullish move to the upside lasted about two and one-half months and was comprised of roughly 1,000 pips.

So when did the downtrend begin?

To answer that, let’s look at the first range identified on the chart.

Oftentimes, when an uptrend comes to a halt, price action will trade in a range consolidating for a period of time.  The upward trend “stalls” and the pair just bides its time until the market decides how the pair will continue to move over going forward. 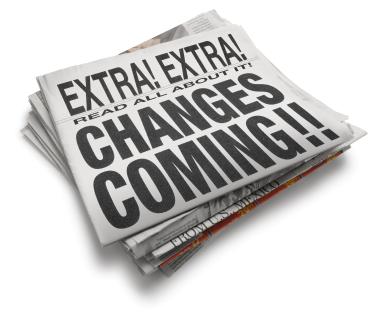 In hindsight, we can see that when price broke out of that rectangle to the downside for the first time, THAT was the official beginning of the downtrend.  However, since none of us possess that infallible crystal ball, no one knew that this was the end of the uptrend and the beginning of a prolonged downtrend.  Only the passage of time will provide us with that answer.

As traders, what do we need to see that indicates a growing potential that a trend change is happening and is likely to continue?

Let’s reverse engineer what we saw happening in the uptrend.  If we look for the opposite of an uptrend we should be looking at a downtrend.

We also note that as this move to the downside continues, the AUD is becoming weaker and the USD is becoming stronger.

Let’s look at three areas that I monitor when considering whether or not a trend change has taken/is taking place.

1)  If the pair continues to make lower highs and lower lows and take out levels of prior support as it moves down, the pair is building a downtrend.  The longer that process continues, the more likely it is that there will be a trend change.  So how long is longer?  Again, there is no black and white answer. Aggressive traders will call the trend change earlier and start taking short positions sooner than will a conservative trader.

2)  As price begins to move closer and closer to the 200 SMA, the closer it gets to it the more likely that we are looking at a potential trend change.  Once it trades through the 200 SMA and closes below it, that is very compelling data that the trend has changed.

So while there is not much certainty in calling a trend change in the short term, the above three points are what I monitor to determine if a trend is continuing or losing momentum and ultimately changing its direction.